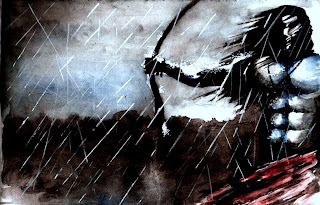 DAANVEER, ANGARAJ, SURYAPUTRA, DIGVIJAY all are the synonyms for 'karna' and unlike superman, spiderman or thor neither he could fly nor could shoot webs through his hand. He was a man known for his friendship, loyalty, simplicity, sacrifice and as the greatest archer and warrior. The only super power he had was his 'KAVACH 'n KUNDAL' and even that was taken away from him before the battle of mahabharat by decieving him and taking advantages of his generous and giving nature.
WHO WAS KARNA ?
The eldest son of kunti & SUN, eldest of all the pandavas but was grown up in champanagar by a foster parents who belonged to low caste and their job was to take care of the horses of the kings and hence he was called "SOOTPUTRA". He came to know about his real identity just before the battle of mahabharat by lord krishna. KARN who proved himeslf to be warrior of warriors but still never got due respect as he was a sootputra. Karna was also the king of ANGA state and was also the head of military operations of DURYODHAN.

THE GREATEST FRIEND & FAMILY MAN KARNA !!
Karna was the best son, best brother and an ultimate friend. when everybody rejected karna based on his caste, duryodhan identified the potential of KARNA and made him the king of ANGA. From there on karn woved his life for his friendship to duryodhan and acted as his shield and sword till his last breath. It is true that KARNA was misled but he did it for friendship and he was too simple to understand the politics behind it. Even when he came to know about the truth regarding his real parents by krishna and was offered to swap the sides to join their real brothers and after the pandavas win the battle , he being the eldest son will get all the kingdom, he refused the offer as he had swear to serve his friend duryodhan & had greater respect for his foster parents who sacrificed everything for his happiness.
GENEROUS KARNA
KARNA was so generous that he had taken oath that no one will go back empety handed if they asked for anything from him. he used to give all his belongins to the people who came to him be it land, gold or even his services . even he donated his 'kavach and kunal' when devraj indra came in form of a saint and asked it. Even in the battlefield of mahabharat on the 17th day when he was dying he heard a man crying as that man had no money to prepare for his dead son's funeral (who was a soldier), KARNA took a stone broke his two gold teeth he had and then donated it to him as his last donation.

CHEATED KARNA
god knew that karn was invinsible and in a fair battle no one could have defeat him, so a strategy was plotted agains karna. he was cursed at 3 places which played important role in his death.
1) when KARNA went to learn the brahmastra but was rejected by guru drone as karna was a sootputra, KARNA went to LORD PARSHURAM and lied to be a brahmin as parshuram taught only brahmin students. so one day when parshuram was sleeping on KARNA's lap, a scorpion injected his fangs in karna's leg but he did'nt moved as he did'nt wanted to break his teacher's nap. But as soon as parshuram felt the warmth of blood he woke up and said no brahmin can tolerate so much of pain and so cursed him that he has learned the bhrahmastra but will forget to use it in time of need.
2) One day when karn was on hunting he killed a cow by mistake and the the owner of cow cursed him that the way you have killed a defensless person, one day you will be killed the same way when you will be without weapon.
3) When karn was returning home he saw a girl crying as she had dropped milk and was scared that her foster mother will beat her. KARNA being generous grabbed the soil and squeezed the milk out of it then he was cursed but mother earth that he has caused earth pain just because of a girl so one day earth will squeeze his charriot's wheel in the same way.
APART from these curses LORD INDRA came and asked KARNA to donate his kavach and kunadal as no weapon in the universe could penetrate it, KARNA gave it even though he was knowing the consequences because of his generous nature.
EVEN his real mother kunti aked him not to kill her 5 sons who were also his brother . KARNA agreed that he won't kill his 4 brothers but will not leave ARJUN who had killed his step brother SHONE and his elder son SUDAMAN. She also restricted him from using NAGASTRA more than once and when KARNA used it on ARJUN, KRISHNA deflected the arrows way.
WARRIOR KARNA :
KARNA proved himself to be the greatest warrior of his time. With his kavach and kundal nothing could hurt him, he proved himself by beating arjun in archery in a contest to choose the best warrior of hastinapur. He went on war with all the kingdoms for DURYODHAN and returned undefeated. He had defeated warrior like JARASANDH even during mahabharat he killed hundreds of thousand soldiers including ghatotkach and deafeted all the pandavas except ARJUN but did not kill them (including mighty BHIMA) because of his swear to KUNTI.
HUMILIATIONS:
KARNA was rejected and humiliated throught his life just because he was a sootputra. Guru drone never taught him anything as he was sootputra, when he defeated arjun in archery still he was being laughed at as he was sootputra, DRAUPADI insulted him for the same reason and even pitahma bhism insulted him during the war for which he stayed away from the battle for 11 days ( which later on was clarified as pitahma never wanted KARNA to fight against his own brothers)
APART FROM ALL THESE TRAITS KARNA WAS ONE OF THE MOST HANDSOME MAN OF HIS TIME WITH BIG BLUE EYES AND BROAD SHOULDERS. KARNA FOR ME IS A REAL SUPERHERO WHO HAS INSPIRED ME IN PAST AND WILL BE A SOURCE OF INSPIRATION FOR ME IN FUTURE. HE WAS INDEED THE BEST PERSON IN ALL ASPECT
Posted by SIDDHARTH MOHAN at 8:25 AM 1 comment:

SIDDHARTH MOHAN
a student doing my post graduation, who loves literature and is partially in politics. i am a moody person so depending on my mood i can spend time very silently and quietly reading a novel or chatting .. or u can find me racing a car or bike cutting through traffics .. or doing bunjee jumping sort of thing. i love making friends aharing infos. healthy discussions etc. i am strictly against drinking or smoking and more than anything i value my FAMILY 'n friends.